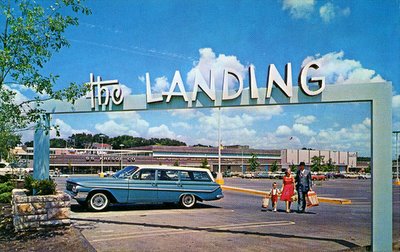 Speaking of grocery stores, last night was my neighborhood association’s annual meeting with special guest Beth Gottstein, our 4th district city councilwoman. One of the most dramatic moments of her speech was when she said she was working to bring a Trader Joe’s Grocery store to the Landing – calling it her “dream project”. What! Of course everyone in the room ooh’d and aaah’d and clapped, but really- come on! This sounds about as likely as the Chiefs winning the Superbowl this year.

For those of you unfamiliar, the Landing is an old mall at the corner of 63rd and Troost that has been declining over the years. Currently it houses a big thrift store, a Harold Penner’s, a Glamourama, among others. Trader Joe’s is a trendy low cost, health conscious grocery store mainly found along the east and west coasts. It’s kind of like a poor-man’s Whole Foods. Of course I would like nothing more than to see a Trader Joe’s in Kansas City, and the Landing would be extremely convenient for me, but come on. That is so far-fetched and irresponsible for her to be spouting out at neighborhood meetings. If Trader Joe’s were to come to Kansas City, is that really the spot they would choose? No. And does Trader Joe’s even want to come to Kansas City? Probably also no. It’s great to have high aspirations for Kansas City, but I think Beth should have kept this “dream” to herself.

(Thanks to Malls of America Blog for that incredible image!)