So I thought of a hilarious new weekly series for my blog: If you were famous and had to move to Kansas City, where would you live and what house would you buy? Take an easy one for example – like Garth Brooks. He would probably buy a bunch of land out south in Kansas, build a house and have a giant sign made that says GB Ranch – and then he’d probably get some horses so he could feel more like a cowboy.

So, now for the real “where would they live”. In honor of St. Patrick’s Day today, I thought it appropriate to choose an Irish celebrity for our first profile. Wow, there really aren’t many interesting AND famous Irish folk – especially ones that anyone would care where they would live. The closest I could get is a well known Irish-American actor named George Clooney. I decided that he would live near the city because he wouldn’t think it was “cool” enough to live in the suburbs. He’s got an image to protect. Also, he would need a house with lots of space for all his cars, pools, and expensive things. And he would want the area to be fancy and somewhat exclusive and really expensive. With this in mind, I think he would be most suited for Mission Hills, Kansas, in the older part nearest the Kansas City Country Club and the Country Club Plaza. Also, he seems like a more traditional kind of guy – not a modernist, so I think he would like something built with traditional materials like brick, with lots of rich wordwork inside… maybe this brick tudor listed at just over $5 mil. 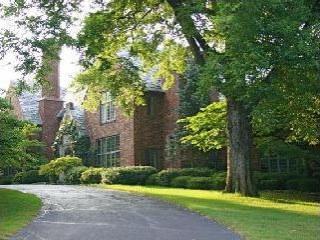 2 responses to “First in the series "where would they live"”