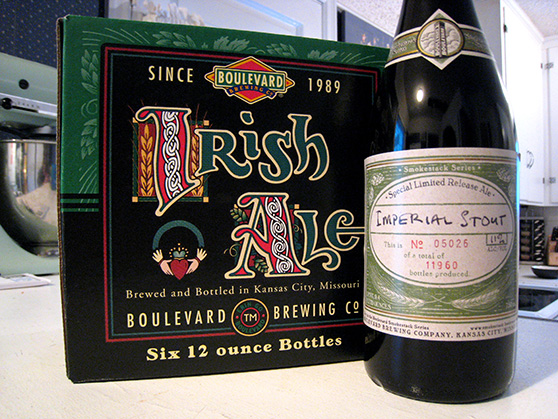 Attention Kansas City beer nerds, our local heroes at Boulevard Brewery have released beer #7 in their limited-run Smokestack Series.  According to the label notes, Boulevard Smokestack Imperial Stout is a recipe inspired by the stout beers that were designed to withstand a long sea journey to Imperial Russia and the Baltic States.  To better survive the journey, these beers were brewed with high levels of alcohol and hops.  Sounds good so far.  Boulevard says they have put their own spin on the traditional recipe and process:

“The result is a unique blend of English tradition, Belgian eccentricity, and American ingenuity.”

This beer has a whopping 11% ABV (alcohol by volume), so it should help keep my family warm this winter.  We haven’t tried it yet, but it’s received rave reviews on Beer Advocate.

Side note: The annual release of Boulevard Irish Ale just arrived in stores as well.  Spring can’t be too far behind!