This is a guest-post by my husband, who is part of a BBQ team that competes in contests around the area. This will be his team’s fifth-straight year competing in the American Royal BBQ, which takes place this weekend in the West Bottoms area of Kansas City. 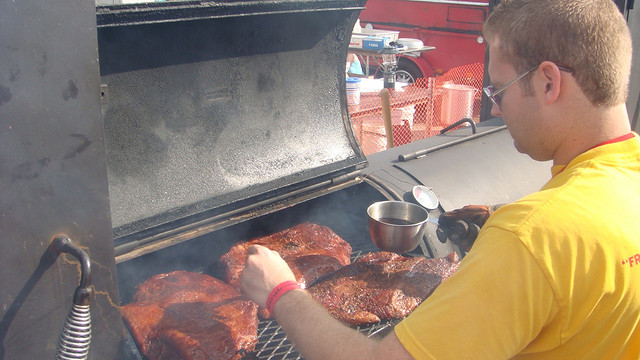 The American Royal BBQ is a massive annual BBQ cookoff contest that takes place in Kansas City, Missouri. The BBQ contest is just one element of the American Royal, which is a two-month long series of events that celebrate Kansas City’s agricultural heritage. Because this particular contest is so large in both acreage and number of teams, it can be challenging to know how best to take-in the festivities. Here are some tips and tricks for enjoying this event to the fullest:

1) Understand the Event
I’ve spoken to a lot of American Royal virgins who don’t really understand the format of the event. It helps to understand that, for the most part, the 500 teams gathered in Kansas City’s West Bottoms are there for one of two reasons – to either win a big-ass bbq trophy OR to party for three days straight with their friends. Either way, most teams are not there to share their food, beer, or women with strangers. That’s why it’s absolutely crucial to get to know a contestant . . .

2) Get to Know a Contestant
If you don’t have friends on a competing team, you can still pay $11 to enter the gates, but you won’t get the true American Royal BBQ experience. Most teams host private parties on Friday or Saturday night (or both), catering bbq and beer to friends, family, and clients. By Friday evening, the competition grounds take on a resemblance to the Arrowhead Stadium parking lot before a game. Private parties of various sizes begin to take shape, each with their own stash of food and booze. Without an invitation to one of these private parties, you’re left to the mercy of the event’s food-court vendors and entertainment, which consists mainly of overpriced beverages and classic-rock cover bands. Fortunately, obtaining an invitation to a party is pretty easy thing to do. There are so many teams at this event, that you probably have a friend – or a friend of a friend – throwing a party somewhere. This leads to an effective fun-maximization strategy – team-up with a buddy and jump around to multiple parties . . .

3) Jump Around
The only thing better than attending an American Royal BBQ party is attending 10 American Royal BBQ parties. You can do this with the help of a friend or two. Team-up with someone who knows a couple teams that you don’t know, and use the power of association to jump around from party to party. Before you know it, you’ll have new friends, a new pulled-pork sandwich, and a new cup of beer in your hands. Be careful, though, because if your strategy is too successful, you may not want to drive home. Fortunately, it’s pretty easy to find a ride . . .

4) Find a Ride
As with any party situation, it’s best to think ahead so you won’t get caught without a responsible ride home. My advice is to try to avoid driving and parking at the American Royal all together. Keep in mind that parking at the American Royal is not free. The grounds are surrounded with private surface lots, with owners asking anywhere from $5 to $20 per car. Between parking and the $11 gate admission, some people will end up spending upwards of $30 before they even get their first taste of smoked brisket. If at all possible, have a taxi or a friend drop you off at the event gates, and take a taxi home. Alternatively, the American Royal has set up free shuttles that run from downtown and Union Station parking lots in an attempt to alleviate some of the congestion and parking hassle. Regardless of what decision you make for transportation, the you have plenty of options – and that goes for the whole event – there are so many teams, parties, and people, you can pretty much “choose your own adventure.”
**UPDATE FOR 2014: Everything is accurate with the following exceptions: Gate entry is $15 for 2014. On Friday between 5:30 p.m. and 2:00 a.m., the free shuttles will be running from the Union Station Parking Garage, George E. Wolf Garage (11th & Oak), and Town Pavilion Garage (13th & Grand).**

5) Choose Your Own BBQ Adventure
The best thing about a night at the American Royal BBQ, is that you’re free to make it whatever you want. Wander the lots, taste the bbq, and enjoy one of the best events Kansas City has to offer.

Did I miss anything here? If you have something to add, please leave a comment.

Thanks for reading, and have a great time at the American Royal BBQ!