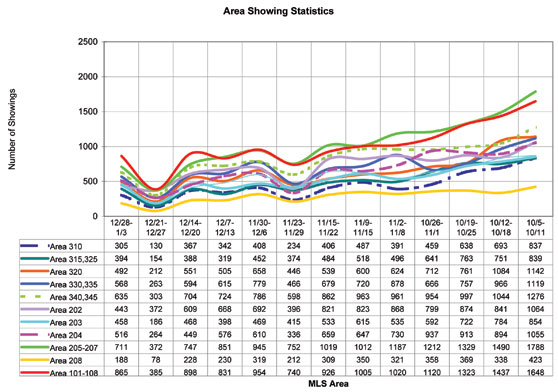 My boss made this chart – I’m sorry it reads kinda backwards. As you can see, there was a big dip in showings over Thanksgiving and Christmas. Once the new year hit, showings began to creep back up again. I’m sure the storm we are expecting today will slow us down again briefly, but I know there are many people out there who want to buy and sell so I don’t expect it to stay down for long.

As to my 2010 real estate predictions… Of course they mean nothing especially with all the extraneous factors that could affect the world, the city and the economy – but here goes. I think what everyone else probably thinks, which is that sales will be strong from now until the end of summer and then will taper off sharply. With the tax credit for both first time home buyers and repeat buyers in effect until April 30 (June 30 to close), people are anxious to get into the market now but once that ends I expect sales to decline. If only the weather would cooperate so people can get their homes ready to sell and buyers could get out there – I’d hate for folks to miss out on the whole month of January because that April 30 deadline will be here before we know it.