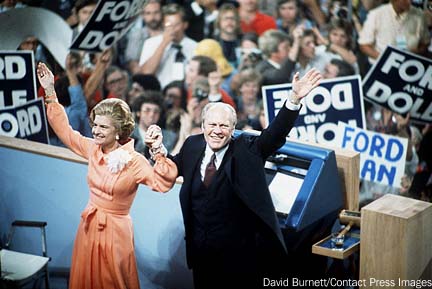 I stumbled upon this Time Magazine article from August, 1976. It is a profile of Kansas City, written just before the 1976 Republican convention (which was held at then-new Kemper Arena). Its pretty interesting, and some quotes from the article could almost pass for current news. Check these out:

“The city is now laboring to restore the dreary 140sq. block downtown area, which is populated only during office hours and abandoned at 5.”

“The new 17,000-seat, $23.2 million Kemper Arena, where the Republicans will gather, is set like a snow-white spaceship in the bottoms along the Missouri, just next to the decaying old stockyards. ”

“Some other attractions next week: the Kansas City Royals, currently one of the hottest teams in the American League, will have three home games.”

“New Yorker Writer Calvin Trillin, a native of the city, has rather eccentrically written that Kansas City has the best restaurants in the world. The best of the best, says Trillin, is Arthur Bryant’s barbecue restaurant.”